Originally called the “Dutch Reformed Church of Palmyra,” we were the outgrowth of a mission. We were organized on August 15, 1887, with 34 members – mostly farmers. Services were held in the Presbyterian Church until March 1890. Then, the old Methodist Church on Cuyler Street (to the rear of the bowling alley) was bought from Plinty T. Sexton. Services were held there until they sold the building to the Independent Order of the Red Men and purchased the current site on Canandaigua Street and build a small church and parsonage. The Church was 50’x54’ and made of brick, with Sunday School being held in the basement. To the rear of the building was a hitch barn (50’x100’) to hold 50 horses. Now, we are formally named the “Palmyra Reformed Church.” In the early 1940’s, the hitching barn was removed and an enlarged parking area was put in. On April 17, 1966, a fellowship hall was added. Now, we are a congregation from diverse backgrounds and walks of life. We are known in the community as a Christ-centered, Biblically-based, loving, mission-minded congregation. 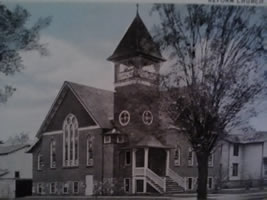